Episode 41: Conversations with an R Jedi

As much as we love it or hate it, programming plays an increasingly important part in biological research. But, saving the world one data point at a time is no easy task. In this episode of Naturally Speaking Shorts, Laurie Baker (@llbaker1707) speaks to Hadley Wickham, Chief Scientist at RStudio, about the ins and outs of programming. Hadley’s job, put simply, is writing software that helps people make sense of their data — making programming and data analysis in the statistical programme R less painful.

…to describe Hadley as “kind of a big deal in the world of data science” is a bit of an understatement.

As a developer of several famous and widely used R packages including ggplot2, dplyr, tidyr and ggvis, to describe Hadley as “kind of a big deal in the world of data science” is a bit of an understatement. His packages are helping researchers around the world to eradicate polio, fight crime, save endangered rhinos, and predict climate change hundreds of years into the future. He’s also an incredible teacher, presenting workshops across the globe.

In this podcast, Hadley talks about how he became a developer in R; the interesting data sets he’s working on currently; and his advice for how you too can become an R Jedi. 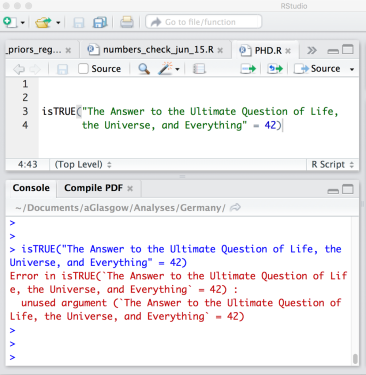 It’s 2am and only one thing stands between you and solving the answer to the Ultimate Question of Life, the Universe, and Everything.

Unknown to many, missing values in R are thought to have inspired the lyrics of several famous artists including Rihanna, Wilson Pickett, and that guy who came up with the batman song.