Summer can be a quiet time around the Institute with many of our researchers out in the field collecting data, away at conferences, or off on holiday. So, before we get back to our usual programme of stimulating research—and you are in for some treats soon—we thought we would kick back and take it easy with some cake. But these are no ordinary cakes, these are #BakeYourStudySpecies* cakes!

To celebrate our students passing their viva (a gruelling examination of their PhD thesis) we congregate to enjoy a glass of bubbly and a slice of cake. However, this has spawned a bit of a confectionery competition, as Institute researchers vie with each other to create the most elaborate and biologically accurate cake to celebrate the birth of a new Doctor of Philosophy. See below for some of the delights we have had over the last year.

(*We really can’t take credit for this brilliant hashtag, which was started by the Sensory Ecology Group at Exeter. Make sure to head to Twitter after you are done here to see some more crafty science cakes.) 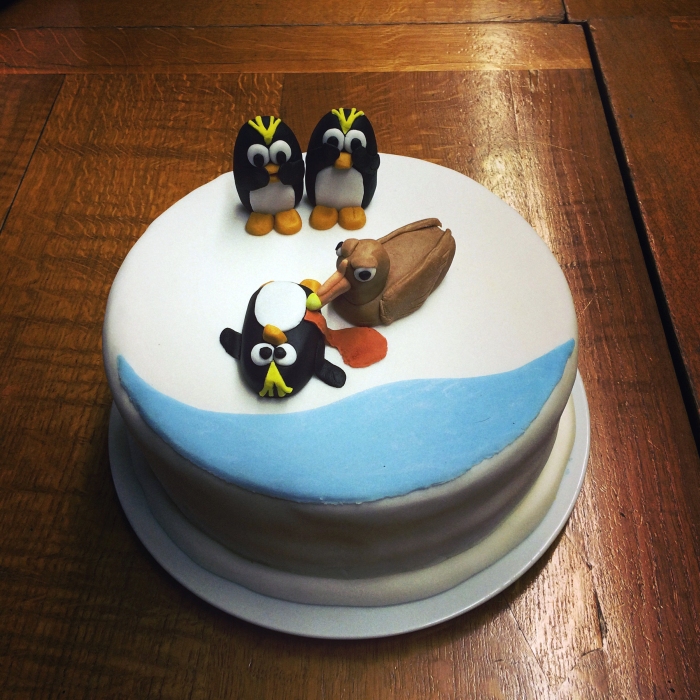 Macaroni penguins are a small species with exceptional yellow eyebrows. However, despite their punk rocker look this species is vulnerable, with an overall population decline of ~70% since the 1980s.

Working with the British Antarctic Survey, Catharine Horswill studied the population trends of this charismatic species on South Georgia, an island that is part of a British overseas territory in the southern Atlantic Ocean near Antarctica. While Cat found that warming waters due to climate change were actually helping adult macaroni penguin survival, two thirds of all their chicks died in their first year. A major driver of this was predation by a booming population of giant petrels—something honoured here in one of our more morbid viva cakes.

It is not easy making an anglerfish look appetising, yet somehow it was achieved for Rosanna (Zan) Milligan. These fish are ugly blobs with massive pointed teeth. Their only redeeming trait is a somewhat comical bioluminescent lure on their foreheads, used to attract prey.

Anglerfish form part of a little studied deep-sea fish assemblage, which was the focus of Zan’s research. She looked at the population trends of fish living below 200 meters, and in particular what impact human activities are having as we explore the depths for resources to exploit—particularly oil and gas.

This cake represents four years of hard work by Jimena Guerrero Flores, who studied the conservation genetics of neotropical otters in Mexico. Jimena found some really interesting population structures, both within Mexico and across South America, even identifying a distinct evolutionary lineage. By applying some cutting-edge landscape genetic analyses she was also able to identify the geographical features that explained genetic population structuring (elevation and slope).

Although Jimena’s fieldwork was conducted along the beautiful rivers of Mexico, all of her genetic data were extracted from otter scat (faecal) samples, so after four years of this she had only one request—no otter poo cake! It was hard to resist, but her office mates did well.

Seabird colonies range in size, but can easily number hundreds to thousands of breeding pairs. To accurately estimate the size of these colonies can be challenging, especially for species like puffins which have unpredictable daily movements and breed in burrows. To improve this Adam Cross piloted a novel technique using time-lapse photography to more accurately assess population sizes in difficult to access locations. However, Adam was interested in something else: what effect does birds faecal waste (guano) have on island food webs?

Adam discovered that not only did the presence of seabirds alter grass communities, but also that the concentrations of nitrogen, and particularly the δ15N isotope, were higher in grasses within colonies. Amazingly, increased δ15N was also seen in the sheep and rabbits eating the grass, showing that seabird guano has a significant effect on island nutrient cycles. This was all nicely summed up in his cake.

Read one of our past blog posts to find out more about how ecologists use isotopes to measure what animals eat. 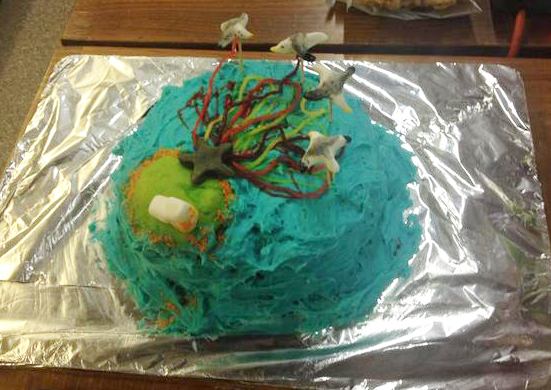 Seabirds can be used as important indicators of marine ecosystem health as they are conspicuous and easy to monitor. Technological advances have also allowed for the miniaturisation of electronic trackers to monitor exactly where birds are flying. Recent PhD Gail Robertson spent years researching the movement, diet and behaviour of several seabirds in the North Sea, with a particular focus on Arctic terns, common terns and black-legged kittiwakes. Her work highlighted how such studies can be used to investigate marine habitats and answer ecological questions, and may also have an important application in the designation of offshore protected areas for marine predators.

However, perhaps most significantly for this post, Gail’s research inspired this brilliant cake which depicts the tracking data for foraging kittiwakes.

2 thoughts on “Caking it easy”