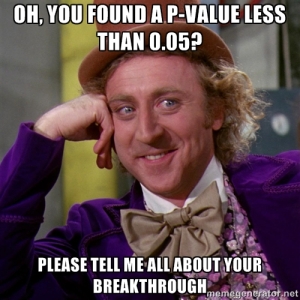 It is difficult to find a scientific paper that does not include p-values in some capacity. Most often, p-values are used to statistically interpret whether the results of a given study are “significant” or if a real effect is being observed. However, a number of recent papers have begun to challenge this paradigm, suggesting that p-values are now used incorrectly and in ways that they were never originally intended. For example, Lewis Halsey (University of Roehampton) and colleagues not only demonstrate that p-values are an arbitrary criterion for forming conclusions, but more worryingly, that they are extremely unreliable.

In this episode of Naturally Speaking, Shaun Killen chats with Lewis Halsey about the controversy surrounding p-values in research, and is joined by statistician Paul Johnson and the stats-savvy James Grecian. They discuss the problems with p-values, the research culture that perpetuates their use, and potential alternatives for interpreting data. Listen to the podcast here!:

Episode 25 – The Problem With P Values

Papers mentioned in the episode:

And, the editorial in Basic and Applied Social Psychology explaining that journal’s decision to ban the use of p-values

Intro and outro music sampled from:

One thought on “Episode 25 – The Problem with P-Values”